You are here: Home / Exploring the Cannaverse / Pipes over Potatoes: a guide to starter paraphernalia 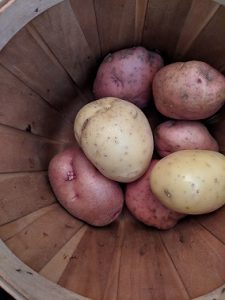 Some people have a can-do attitude. I’d like to think I do also, but if I’m being honest, I have more of a make-do attitude. Raggedy or outdated clothing turned into a fashion statement, random leftovers into a palatable culinary experiment. Based on the wisdom of my favorite chef, Alton Brown, and my inclination toward minimalism, I also tend to eschew “unitaskers”, or items that are good for only one job, like those ridiculous plastic banana slicers. Have they not heard of a fucking knife? Anyway, I thought of weed grinders and pipes as unitaskers. Surely I could use something I already had at home to prepare and smoke weed. Every once in awhile, it’s worth proving that we really do learn the most from our mistakes.

When I found myself in a newly-recreationally-legalized dispensary on Alberta Street in early 2016, I was lightheaded with that rule-breaking sensation, the bottoms of my feet tickling and my lungs taking quick half-breaths. Perhaps I was also just a little bit contact high – the establishment was piney and pungent. For moral support, I had persuaded my out-of-state guests, my dear former roommate Dee, and her girlfriend, to come along with me. We were giddy from the heady aromas, and the wonderment that comes from new freedoms, experiencing firsts. The luxury of walking into a storefront for federally-illegal herbs in a hip Portland shopping district was not lost on us. Our faces hovered above several jars of pretty green bud, and we pretended to have an idea of what the right strain would smell like. Dee’s girlfriend threw her head back in horror at a strain called Dogwalker. A euphemism for dog shit in a bag, we all agreed. We made our way home with 3 grams of buds that smelled less like feces, and more like pineapple, supposedly. Dog shit stench still stung our olfactories.

I’d been offered a grinder at the dispensary. No thanks, I’ll use my mortar and pestle. A pipe? Nah, we’ll figure something out. Dee had cut a hole in an apple before with success. Finally, my make-do ways had met their match. Cannabis is no penny-pincher’s bitch. Good buds are tight and slightly sticky, not brittle. My mortar and pestle just squashed the buds, and did not break them up into smaller pieces like we’d hoped. Fuck. Okay, we’ve got this – we tore the buds up with our fingers as delicately as we could, hoping we wouldn’t knock off too many trichomes, the sticky resin-coated hairs that held precious THC molecules. Then, dismayed, we discovered we were fresh out of apples. Double fuck. How about a potato? Sure, it was almost the same, thing, we decided. Dee grabbed a knife and started carving a bowl. I handed her a skewer to create a tunnel to a mouthpiece and a carb hole on the side. It was a spudly work of art. We laughed at ourselves as we tried to light our potato-juice weed with a long-stemmed grill lighter. If you want to feel cool in a decidedly uncool way, I’m your gal.

We may not have actually gotten high that night, or at least not much. But we learned a lot, and played Cards Against Humanity with abandon anyway. It would take me a few more tries, and the purchase of a little lopsided glass pipe before I really got the hang of smoking. I’ve also learned to discern those wide-ranging pot smells, from compounds called terpenes, and learned to love (most) of the stinky ones.

Friends, just buy a tiny grinder and a cheap pipe. Your investment of $20 or less will save your pot from destruction by produce. I promise. Or, as an even easier alternative, pick up a pre-roll for $5, and for the love of goddess, standard lighters are in every corner store. Respect the plant, and get yourself the right gear. Making do can lead you to do some stupid shit with your pot(ato).